The true story of the late Charlotte real estate developer George Cutter begins with his birth in Charlotte on Sept. 29, 1912 to Gracie King and John H. Cutter. George's father was one of the leading citizens of the city. An entrepreneur working in raw cotton, cotton textiles and real estate, John Cutter established the J.H. Cutter Co. just after the turn of the 20th century and was a member of the New York Cotton Exchange.

He died in 1958, his accomplishments were too numerous to be listed here. Suffice it to say, J.H. Cutter was loaded when he passed on, and George benefited from that enormously.

Although he tried to follow in his father's footsteps, his penchant for alcohol and appetite for sex hindered him. Distracted by his vices, he didn't achieve goals nearly as early as his father had.

It's impossible to know what kind of childhood George had. Did his parents push him to achieve beyond his means? Was he made to feel guilty because he didn't live up to the standards his clearly driven father had achieved? Unquestionably, his family was one that set the bar very high.

Did George pursue excessive drink and debauchery in an attempt to assuage wounds from his earlier life? We can only speculate.

A look at the family crypt in Elmwood Cemetery confirms the family's feelings about their place in the community. Cut from hand-carved stone, it is the only such structure in all of Elmwood and serves as an everlasting monument to the Cutter legacy: one part business achievement, another part good citizenship and undoubtedly the mix of a third element - ego.

By George's early 40s he was a millionaire real estate developer who owned more property in what is now Uptown than any other single individual. Married to Nancy Bell, he was father to four children: George Jr., John H. Cutter II, Bryant W. Cutter and a single daughter, Linda Cutter.

In the late 1950s, he purchased an old postal bus that he had converted into what would today be called a vacation travel vehicle. Taking into account later media reports, it's possible he had another motive: a bachelor pad of sorts - reportedly complete with beds and a bar - that allowed him to be free to roam about and indulge in all his favorite vices.

In July 1961, it appears his bad-boy extracurricular activities finally caught up with him when he was accused of murdering his mistress, Delette Nycum.

According to reports in the Charlotte Observer, Cutter and Nycum had maintained an affair since 1948. Their relationship had soured months before July, but they continued to see one another when, on the evening of July 4, 1961, the two drove to Cutter's bus, which was parked in a storage building near the airport.

Cutter said that he had met Nycum at the bus, and that later, while she was sleeping, he had left for home. Worried about her being in such a remote location he later returned to the bus and found her dead.

Because he wanted to avoid scandal, he said, Cutter somehow managed to convince Nycum's 15-year-old son Ricky to help place the body back in the house he shared with his mother at 2500 E. 7th St. (still standing today) and then tell police he found her there, dead.

Nycum's death was unusually gruesome. It appears that she was literally beaten to death, and the coroner would later state that she had died from "shock and external violence." A total of 251 bruises were found on her body.

When son Ricky called police to the residence, Cutter drove up and introduced himself as "a friend of the family." No doubt trying to make certain that Ricky got the cover story right, Cutter confessed that he had spent the night with Delette Nycum on the previous evening and even admitted to arguing with her and slapping her but insisted he had nothing to do with her death.

Police weren't buying Cutter's tale and eventually hauled him in and charged him with Nycum's murder. Denied bail, Cutter was forced to spend much of July, August and part of September in the county lockup before he went to trial on Sept. 11. The trial that followed was nothing short of a Charlotte version of the O.J. Simpson spectacle.

The prosecution contended that Cutter kept Nycum in the bus for two days, where he slowly beat her to death. The defense maintained that her death was the result of alcoholism. The incident attracted so much attention it was covered in papers across the country and in Time. A report in the Raleigh News and Observer confirmed that Cutter spent five hours in a brutal cross-examination, being questioned over and again about specific dates and times relating to his whereabouts and periods he spent with the victim.

In the end, despite mounds of circumstantial evidence, Cutter was found not guilty. His career, however, was damaged beyond all hope of restoration.

He would lose control of the 14-story Cutter Building at the corner of Tryon and Fourth streets that he was constructing at the time of Nycum's death. It would eventually be renamed the American Building.

His wife Nancy would later divorce him, and he would eventually step down as the president of Cutter Realty. His final business dealings were as the owner-operator of the Farmhouse Restaurant in Belmont.

Four years after the trial, Cutter died at the age of 53, rejected by Charlotte society. His body would be laid to rest in the family crypt in Elmwood Cemetery. 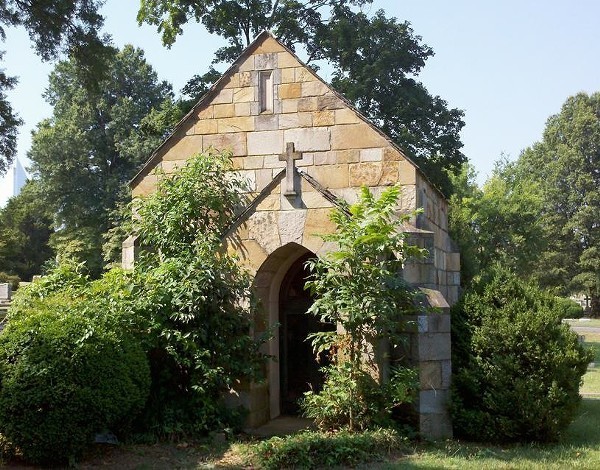 Delette Nycum's murder would never be solved and the curious aspect of her son's collaboration with Cutter also remains in question. How could a middle-aged man successfully convince a teenage boy to help cover up the death of his own mother?

Some local residents say what they describe as "the Cutter family curse" didn't end there. George's former wife, Nancy Bell, later remarried Charlotte insurance consultant Adon Smith. In 1977, while vacationing with her husband in Tennessee, a 300-hundred-pound boulder fell from a steep embankment and crashed into the couple's 1972 Cadillac, killing the former Mrs. Cutter.