The road in the northeastern edge of the county that was once home to rough-edged bars was formerly called Jackass Road, the Charlotte News reported in a 1975 article on strange local road names (stored in the Carolina Room at the Uptown branch of the public library). When the road was paved for the first time, and the paper didn't say when that was, the locals decided to change its name.

"Somebody figured all that macadam made the street too fancy for its name," the paper reported. Until 1956 in the city and 1965 in the county, people could name a road whatever they wanted -- and apparently did.

According to the writings of local historians Hanchett and Dan Morrill, Central Avenue, a major thoroughfare from Uptown through Charlotte's eastside, was called "Lawyer's Road" for the first century of its 200-year life. Back then, lawyers would travel the dirt road past farms on their way to Wadesboro, where the nearest courthouse was located.

Then in 1899, two local developers created Piedmont Park, which ran along Lawyer's Road from Seventh Street outward for a half-mile. It was the city's first neighborhood to use deed covenants and other tools to keep blacks and poor whites from moving into the neighborhood. Its developers, F. C. Abbott and George Stephens, rebuilt Lawyer's into a wide boulevard, befitting its new role as the entrance to elite east side neighborhoods. The street was then renamed Central Avenue, a name developers thought would sound better to upper-class home buyers who were becoming increasingly willing to buy homes on what was then considered to be the "city's edge."

Remount, which connects South and Wilkinson boulevards, was named for an army "remount station" at Camp Greene during World War I, according to historical documents from the Carolina room. The station was maintained as a place for soldiers to secure their horses in between assignments. 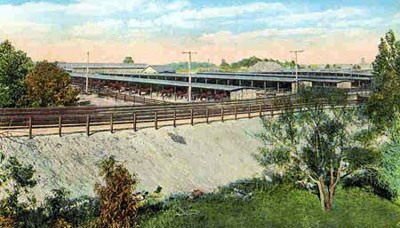 MOUNT IT UP: The remount station at Camp Greene. It appears that early county residents may have taken this trend to the extreme. In the Bible, Hanchett points out, the plains of Sharon are next to Mount Carmel in Israel. Mount Carmel Presbyterian Church, in what is now known as the Carmel Road area, abuts the Sharon Road area.

As previously stated, before 1956, street-naming occurred on a first-come, first-serve basis. Now if residents want to change their street name, petition approval of 60 percent of the residents is required. Names cannot exceed 21 letters, be named after a business, or be "possibly offensive."

Several years ago, a dispute over changing a "possibly offensive" name was heard in front of city council. In 1997, six residents of a dead-end street off Beatties Ford Road, between Kidd Lane and Miranda Road, met before the county commission to request not only a name change, but that the $300 street-renaming charge be waved. Unlike other street name changes made for "pleasure," this request was being made because the street name caused residents "ridicule, mockery and embarrassment." It's hard to decide which is funnier: the old street name Dick Road or their replacement choice, Cowboy Lane -- an obvious overcompensation for residents' injured pride.

At the commission, Scott Tucker, a Dick Road homeowner, testified that apart from the ridicule, mockery and embarrassment, the old name posed serious safety risks. In the past, emergency responders had gotten lost on calls because the street sign doesn't last very long on the post before someone steals it. (And what about all the cold pizzas they must suffer through?)

Robert Dick gave opposing testimony at the hearing, recounting the history behind his family name. But it wasn't enough. Cowboy Lane passed 7-2.