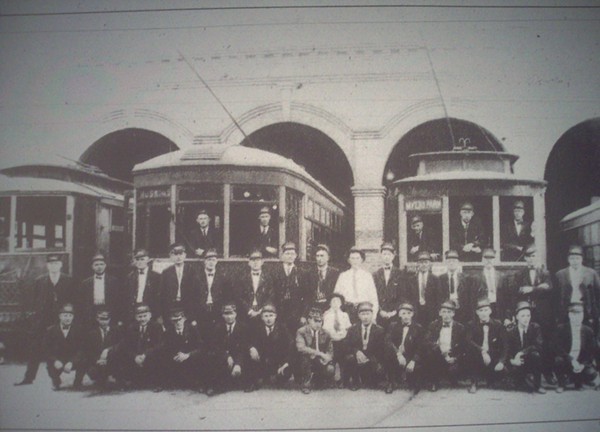 These trolley cars serviced Myers Park and Hoskins, as well as the large number of employees who earned their living by operating the system, some of whom are pictured.

Like many cities around the U.S., Charlotte eventually fell prey to the wiles of the automobile industry. Documentaries on the demise of trolleys in America point a finger at Ford Motor Co. for offering various kickbacks to prompt towns to dismantle the early form of mass transportation to make way, of course, for the increasing popularity of combustible-engine vehicles. In other parts of the country, General Motors and its suppliers were suspected of conspiring to buy up streetcar companies with the goal of deliberately converting them to bus lines through the use of shell companies and subsidiaries. Others point out that while its true that both somewhat contributed to the decline of the streetcar in America, the real truth is a bit more complicated.

Like many systems across America, Charlotte's trolley system was far from perfect. Safety protocols and procedures were mostly manual and as more and more cars took to the roads, streetcar efficiency took a major hit. Increased traffic and congestion only compounded the safety concerns.

Although it may be only coincidence, the trolley system in Charlotte ceased operation almost seven years to the day of the worst trolley disaster in it's history.

On the morning of March 26, 1931, J.F. Shoemaker, a friendly fellow who was known to welcome his passengers on board with a smile and a nice greeting, was behind the controls of a trolley that traversed between the city's north and south sides.

Most of the riders were women, like Marie Johnson and Ola Etheridge, who made their living as housekeepers for some of the wealthier families that lived in and around the downtown area. Other passengers included poor but hard-working men like Joe Faulkner and Sam Robinson. In total there were 49 individuals along for the early morning ride.

The trolley had already passed through Independence Square and was just about to make the railroad track crossing on West Trade Street. Heading into Charlotte around the same time was Southern Passenger Train No. 11. Going southbound from Danville, Va., to Greenville, S.C., the train carried businessmen bound for Atlanta and families visiting relatives at stops along the way. As usual, it was packed to capacity and on time for its 7:30 a.m. pass through Charlotte.

It had been an uneventful morning and business as usual for Southern Conductor J.A. Sifford and engineer C.M. Martin. All of that was about to change.

"I was standing with the motorman on the Second Ward car when we stopped at the lowered gates to allow a handcar of section men to pass northbound," trolley passenger R.H. Callahan told the Charlotte Observer. "The gates raised and we started across the tracks. A store on our left blinded the view of the tracks to the north. Halfway across the tracks I heard a bell start ringing and at that moment I saw a southbound train roaring down the track. The motorman seemed to try to reverse the car but it was too late and he had no time. For five seconds I stood appalled as the train bore down on us. The passengers broke into screams of terror. After an awful rending crash, I had a nauseating sensation of floating through space, as if hurled at great velocity, and then I was knocked unconscious. I must have fallen through the door of the trolley and slid several feet on the pavement."

The watchman evidently did not see the train approaching from the north and raised the gates when the trolley passed along from the south.

According to various accounts in both the Observer and the Charlotte News, the train locked its wheels in an attempt to stop but simply did not have the time. Within seconds, the long passenger train slammed into the trolley, pushing the 40-ton streetcar aside like a child's toy. The train suffered relatively little damage. The trolley, however, fared far worse. 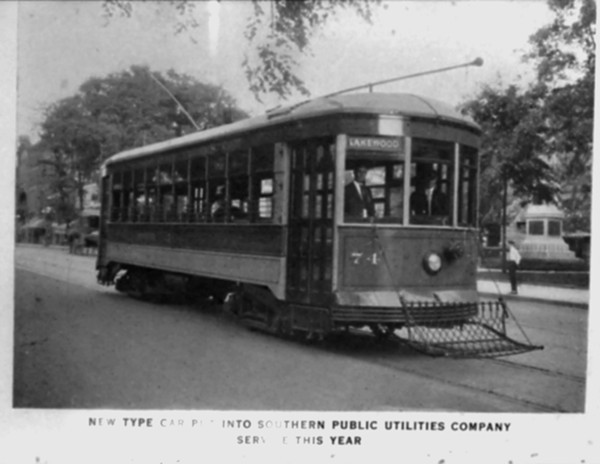 This trolley, which was used to carry riders between downtown and Lakewood Amusement Park, is similar to the one destroyed in the crash on March 26, 1931.

From the Observer: "The street car was crushed in the middle, hurled off its track to one side and every pane of glass was shattered. Several of the screaming passengers were thrown through the windows."

Etheridge was thrown through a shattered window and clear of the tracks. She sustained head injuries and was in a state of shock. Johnson was tossed from the car through the boarding door, breaking an arm and also sustaining head injuries.

Robinson suffered severe lacerations to his right side, dislocated his shoulder and was left with extensive visual impairment from shards of window glass.

Faulkner was thrown from the trolley directly into the path of the oncoming train, which rolled over him, severing his right foot.

According to newspaper articles of the time, blame for the incident was never fully assigned.

Of the 49 passengers on board, 43 were injured. Fortunately there were no fatalities, though the death knell for the Charlotte trolley had quite likely begun to toll.