In earlier incarnations it was known as Cricket Arena, after the cellphone company, and even earlier as Independence Arena, before somebody came up with the cheesy idea of selling name-branding rights to performance halls. As much as I enjoy the restaurant chain's chicken, I have to profess that name is just downright corny for an entertainment venue. Not to mention the big, brassy red and yellow Bojangles logo plastered all over it that so do not blend with the classic mid-20th century contemporary architectural style. 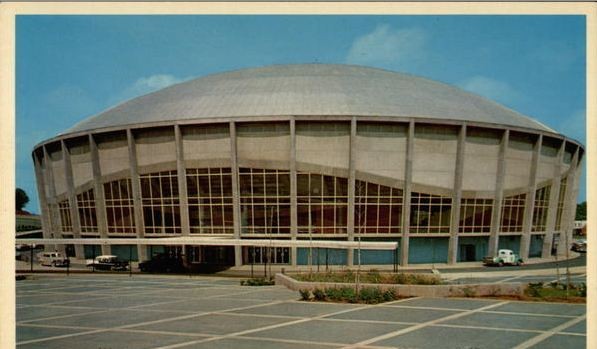 But its bones are what matter. Originally, it was the Charlotte Coliseum, but it's important to note that another "Charlotte Coliseum" also once existed. It opened in 1988 and was demolished in 2007, though some people still don't understand why, since it was popular and larger than what's now known as Bojangles' Coliseum. The latter, which was known as Charlotte Coliseum until 1988, is one of the city's few remaining examples of mid 20th century modern design.

Some people adore its ultra '50s appeal, while others find it a monstrous eyesore.

Love it or hate it, it's played a significant role in Charlotte history.

"It has so many memories for so many people," says Julia Smith, a native who recalls when it opened. "It played a very important part in many peoples' lives. I remember going there when I was just a little girl and ice skating with my sisters and my father, seeing the Ringling Brothers and Barnum and Bailey Circus and the Harlem Globetrotters. Years later, my high school graduation was held there."

Smith saw Elvis perform his last Charlotte concert at the coliseum before he died.

The drive to build what's now known as Bojangles' Coliseum began in the late 1940s, when it was brought to the attention of then-Mayor Victor Shaw that notable celebrities of the day like Sonja Henie, Jimmy Durante and Danny Kaye flatly refused to perform in the city because it was lacking a large enough performance space. Half a decade and a few million dollars later, the Odell & Associates-designed coliseum (with the accompanying Ovens Auditorium) opened for the first public viewing in May 1955. The first dedication ceremony, held Sept. 11, 1955, attracted an estimated 13,000 people.

One event in 1958 was held shortly after a massive July storm blasted through the city, ripping off large portions of the facility's aluminum top. According to a report in The Charlotte News, the event continued without fail, "despite the presence of water leakage from the recently damaged roof." 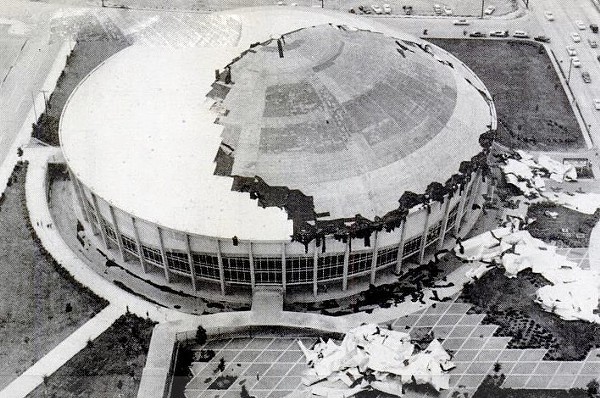 Despite a 1958 storm that ravaged the coliseum, scheduled events went on.

A particularly noteworthy claim to fame: At the time of its construction, the rooftop was the largest free-span dome in the entire world. Articles applauding the accomplishment appeared in such global publications as Look and Architecture and Building.

It shuttered in 1988 and reopened in 2001 with some refreshed period-appropriate retro-renovation and refurbishing.

Check out our first Fact Friday on this Queen City marvel here.