Once upon a time, before the advent of malls, QVC and the Internet, people actually used to do all their shopping in Uptown.

They would take a city bus or drive into town with their families in tow, making it an all-day affair including lunch or dinner at one of Belk’s two in-store cafeterias. They might even wrap up the day with a movie at the old Carolina Theater.

After a busy afternoon and evening with a store packed full of families doing their early spring shopping in 1967, the store closed its doors as usual for the night. It had been a clear and sunny Saturday, with the temperature in the mid to upper 60s.

Belk security guard Onan Smith was making the rounds of the sprawling old downtown store, which stood where the Bank of America Corporate Center is today. Smith had just finished his walk-through of the first floor when he spotted three men he didn’t recognize. 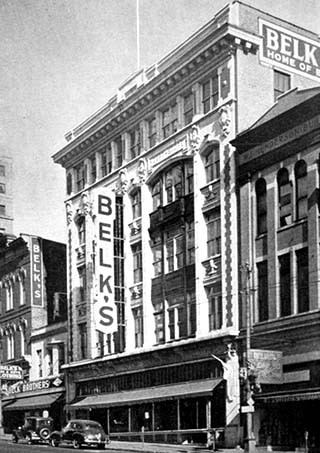 Since the store was already closed for the evening, Smith later recalled that he thought it was particularly odd that the men had seemingly appeared out of nowhere. He said he didn’t notice a fourth man behind him, who knocked him out cold with the barrel of a gun (presumably) before he ever had a chance to defend himself.

While Smith was still unconscious, the men dragged him up a stairwell to the fourth floor and handcuffed him to the staircase railing. According to the guard, several hours passed before he regained consciousness.

During that time, the well-organized gang of thieves used acetylene torches to cut into a large walk-in vault and three other smaller safes. They also ripped open a safe and a wooden cabinet in the jewelry department. According to police, they would walk away with as much as $200,000 in cash and $13,000 in furs and jewelry.

John McCaskill, a former manager of the store, spoke with me about the incident in 2004. He said the case captured national attention. “It left a lot of the employees pretty shook up. Some were even scared to come to work. That sort of stuff just didn’t really happen back then. For the time, it was quite a sum of money.”

For the thieves to know where safes and vaults were located, one would surmise they were familiar with the layout of the store, and, likely, had connections to an insider. McCaskill said the case was never solved.